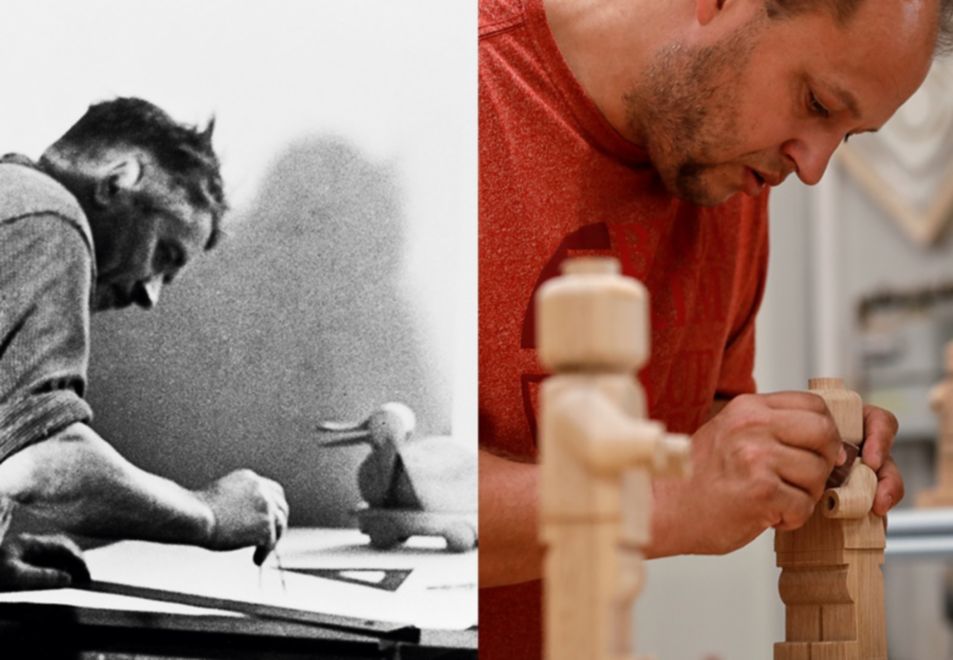 After the stories of Jango and Boba Fett, another warrior emerges in the Star Wars universe. “The Mandalorian” is set after the fall of the Empire and before the emergence of the First Order. We follow the travails of a lone gunfighter in the outer reaches of the galaxy, far from the authority of the New Republic.


The Galaxy is Yours!

Burbank, Calif. – June 9, 2019 – Warner Bros. Interactive Entertainment, TT Games, The LEGO Group, and Lucasfilm today announced LEGO® Star Wars™: The Skywalker Saga, a brand-new console game where players will experience memorable moments and nonstop action as told through the unique lens of LEGO. LEGO Star Wars: The Skywalker Saga is the biggest LEGO Star Wars game, featuring all nine Skywalker saga films, including the highly anticipated conclusion to the series, Star Wars™: The Rise of Skywalker. Launching in 2020, the game will immerse players into the expansive saga with the freedom to control hundreds of characters and vehicles to create their own unique journey through the galaxy.

Developed by TT Games in collaboration with the Lucasfilm Games team and published by Warner Bros. Interactive Entertainment, LEGO Star Wars: The Skywalker Saga will be available for the Xbox One family of devices, including Xbox One X, Nintendo Switch™ system, PlayStation®4 computer entertainment system, and PC.

Friends and family can dive right into their favorite saga film and play through memorable Star Wars moments, reimagined with LEGO fun and humor. Players can start at the beginning with Star Wars™: The Phantom Menace, begin the original trilogy with Star Wars™: A New Hope, or launch right into Star Wars™: The Last Jedi or Star Wars: The Rise of Skywalker, both of which are making their LEGO Star Wars game debut. From the desert of Geonosis, to the swamps of Dagobah, to the snowfields of Starkiller Base – players will have the power to revisit any planet, at any time, in any order they wish. The entire galaxy is available to discover and play in.

“LEGO Star Wars: The Skywalker Saga marks our return to the franchise that kicked off the LEGO video game series. The game will give fans an all-new LEGO Star Wars experience with complete freedom to explore the LEGO Star Wars galaxy,” said Tom Stone, Managing Director, TT Games. “It was an absolute pleasure to be part of the launch of the original LEGO Star Wars game and it’s equally exciting to now move the series forward and help create a new era of LEGO Star Wars games.”

LEGO Star Wars: The Skywalker Saga features the biggest roster of playable characters in the LEGO Star Wars series including the greatest legends from every era of the Skywalker saga. Players can fight against the forces of evil as favorite characters such as Luke Skywalker, Rey, Obi-Wan Kenobi, Finn, BB-8 and a legion of other heroes, or turn to the dark side as Darth Vader, Emperor Palpatine, Kylo Ren, and more. The greatest vehicles from across the galaxy are also available to command. Players can jump to lightspeed in the Millennium Falcon to outrun Imperial starships, battle First Order TIE fighters in Resistance X-wings, or podrace on Tatooine.

“With the Skywalker saga coming to an end, we wanted to give fans the ultimate Star Wars video game experience with all the humor and charm that is uniquely LEGO,” said Douglas Reilly, Vice President, Lucasfilm Games. “LEGO Star Wars: The Skywalker Saga will bring to life all those Star Wars adventures remembered and undiscovered in an epic culmination of all nine saga films as fans celebrate the closing of this chapter in Star Wars.”

“We are thrilled to continue LEGO Star Wars’ 20 years legacy with this impressive new game where kids and families can join forces to explore the galaxy together,” said Sean McEvoy, Vice President, Digital Games, The LEGO Group. “LEGO Star Wars: The Skywalker Saga contains a massive amount of content and is an accessible entry point to the Star Wars galaxy, featuring all of the fun and unforgettable gameplay that makes LEGO games appealing to audiences of all ages.”

LEGO Star Wars video games are enjoyed by multiple generations of gamers around the world with more than 50 million copies sold.

OVERVIEW:
The galaxy is yours in LEGO® Star Wars™: The Skywalker Saga. In this brand-new console game, players will experience memorable moments and nonstop action from all nine Skywalker saga films retold with signature LEGO humor, including the highly anticipated conclusion to the series, Star Wars: The Rise of Skywalker. the game will immerse players in the expansive saga with the freedom to control hundreds of characters, ships and vehicles to create their own unique journey through the galaxy.

• Explore the Saga in Any Order – Players can dive into the Skywalker saga and access any of the nine saga films right away in any order they choose. They can direct where to go and how to play.
• Laugh Out Loud LEGO Humor – All the unforgettable moments from the entire saga have been retold in new, fun-filled, hilarious LEGO humor.
• Play as Iconic Heroes and Villains – There are hundreds of playable characters from throughout the galaxy and every era of the saga. Players can play as Luke Skywalker, Rey, Obi-Wan Kenobi, Finn, BB-8 and a legion of other heroes, or turn to the dark side as Darth Vader, Emperor Palpatine, Kylo Ren, and more.
• Discover Legendary Locales – Players can visit legendary locales from their favorite Star Wars films such as the desert of Geonosis, to the swamps of Dagobah and the snowfields of Starkiller Base. They can then travel through space and revisit any planet at any time. Expansive hub areas based on memorable settings from the films offer fun quests and more to explore.
• Powerful Player Experiences – Players can play on the light or dark side of the Force, master combat, and take control of ships and vehicles for empowering adventures throughout the galaxy.
• Always Family Friendly – This is an imaginative and funny LEGO gaming experience appropriate for kids of all ages. It is an accessible entry point into the Star Wars

Billund, April 9: Twenty years ago, in a galaxy far, far away, the LEGO® Star Wars™ collaboration entered the lives of millions of children and fans around the world. Today, the LEGO Group is celebrating the 20th anniversary of the much-loved range that continues to unite fans of all ages and has inspired some of the greatest battles ever built.

LEGO Star Wars was the LEGO Group’s first IP franchise and has since remained one of the most popular, allowing fans across generations and geographiesto come together in fun and challenging building exercises. Around 700 different sets (including 1,000 LEGO Star Wars minifigures), five video games, several television and web series, and an abundance of other fun merchandisehave been released since the initial launch.

Jens Kronvold Frederiksen, Creative Director of LEGO Star Wars,said: “LEGO play and Star Wars is a dream collaboration for us,and we feel privileged to have one of the strongest fan communities out there who continue to inspire and challenge us to push the boundaries. This 20-year milestone is really a dedication and testimony to our loyal fans who have built, reimagined,battledand shared their LEGO Star Warsadventures with us for two decades. Twenty years on, the Force is still with us and there’s still so much more to come.”

LEGO Star Wars was first introduced at the International Toy Fair in New York in February 1999 and has been captivating fans ever since. An impressive 13 sets were launched that year, as well as a LEGO® MINDSTORMS™ Droid developer kit. Over the years, many crowd pleasers have been released, including the first version of the Chewbacca™ minifigure. This was a triumph in itself because of its challenging design. The design team came up with the idea of creating a head with fur covering the back and front of the torso, which has been used in many minifigure designs since.

Derek Stothard, Vice President of Licensing at Lucasfilm said: “Our collaboration with the LEGO Group remains a huge success because it allows people to explore the Star Wars galaxy in a very unique way. Whether you’re meticulously building the Millennium Falcon for a display shelf or reimagining the battles with LEGO Star Wars models,the LEGO Star Wars range allows us to engage with fans of all ages who find the Star Wars galaxy as special as we do.”

Marking the 20th anniversary, the LEGO Group just released five special sets featuring iconic ships and exclusive throwback minifigures in tribute of the LEGO Star Wars history. The new sets – which debuted on April 1st – are a recreation of some of the most iconic and popular sets from the last twenty years, along with a new subtheme: Action Battle. The LEGO System in Play means that Star Wars devotees can build and bring to life some of their most beloved themes and characters – from Wookiees to Ewoks, Princess Leia to Han Solo and more – for even more intergalactic adventures.

As for the scenes and characters that haven’t yet been sent into the LEGO® Star Wars™ galaxy, stay tuned!
Fun facts only the most hardcore LEGO® Star Wars™ fans know:
– The 1999 Jar Jar Binks minifigure was the first ever to have a unique LEGO® head sculpt
– Yoda,Boba Fett and Ewoks were some of the first minifigures to receive short legs (2002)
– Except for battle droids and stormtroopers, R2-D2 is the character that appears in most LEGO Star Wars sets
– The Jedi Bob minifigure appears in just one LEGO® set, the 7163 Republic Gunship from 2002
– The Darth Vader minifigure has changed many times over the years, but his helmet remained unchanged from 1999-2015
– The 10179 UCS Millennium Falcon spent a day in a sauna, since it couldn’t fit into the ovens used to quality check a product’s resistance towards sunlight
– The cockpit windshield element in the 7191 X-Wing Fighter™ is based on a mould for a 4.5-volt battery box from a LEGO train set
– The 24 minifigures and droid sets included in the 10188 set enable fans to re-enact almost every single scene taking place on the Death Star™
– The Zam Wesell minifigure from 7133 Bounty Hunter Pursuit was one of the first minifigures to have double sided face decoration

LEGO® Star Wars™ 20 years of nostalgia in a wrap:

• February 1999: The launch of LEGO® Star Wars™ is announced at the International Toy Fair in New York by the LEGO Group and Lucasfilm

• 2000: #7190 included the first version of a Chewbacca™ minifigure. It was a challenging design, until the design team came up with the idea of creating a head with fur covering the back and front of the torso, which has been used in many minifigure designs since

• 2001: #10018 Darth Maul launches as a set exclusively available on LEGO.com and in LEGO stores- at a whopping 43 centimetres tall!

• 2002: Only 12 elements are required to build the 2002 TIE Fighter™, #3219. The set is among the early LEGO® Star Wars™ Mini Building Sets launched in the beginning of the new millennium

• 2003: The introduction of more natural skin colours in all licensed products also reach the LEGO® Star Wars™ universe with #10123 Cloud City™ from 2003

• 2014: The trend of constructing tiny, but ever iconic models, re-surfaces with the MICROFIGHTER series. Small enough to fit into a hand – big enough to carry a minifigure

• 2015: The CCBS platform (Character and Creature Building System) with its large-scale buildable figures infiltrates the LEGO Star Wars portfolio from this year onwards

• 2017: #75192 Ultimate Collector Series Millennium Falcon™ launches – 10 years after its impressive predecessor. It succeeds the previous model with 2344 elements reaching a total of 7541 pieces

• 2019: Five special 20th anniversary sets featuring iconic ships with exclusive throwback minifigures launch in tribute of the LEGO Star Wars history – a recreation of some of the most iconic and popular sets from the last 20 years